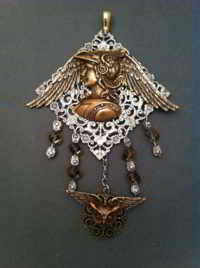 The Athena Talisman is made with brass, silver and silver plated parts and findings and square smoky quartz beads. ATHENE (or Athena) was the great Olympian goddess of wise counsel, war, the defence of towns, heroic endeavour, weaving, pottery and other crafts. She was depicted crowned with a crested helm, armed with shield and spear, and wearing the snake-trimmed aigis cloak wrapped around her breast and arm, adorned with the monstrous head of the Gorgon. The more famous myths featuring the goddess Athena include:– Her birth from the head of Zeus, fully-grown and arrayed in arms; Her contest with Poseidon for dominion of Athens in which she produced the first olive tree and he the first horse; The War of the Giants in which she buried Enkelados beneath Mount Etna and made her aigis from the skin of Pallas; The attempted rape of the goddess by Hephaistos, who spilled his seed upon the earth and produced Erikhthonios, who she then adopted as her own; The assisting of Perseus in his quest to slay the Gorgon and the Argonauts in their quest for the Golden Fleece; The assisting of Herakles with his twelve labours; The weaving contest with Arakhne who was transformed by the goddess into a spider; The blinding of Teiresias for viewing her naked in the bath; The Judgement of Paris in which she competed with Hera and Aphrodite for the prize of the golden apple; The Trojan War where she sided with the Greeks in battle, but attacked their ships with a storm when they failed to punish Oilean Ajax for violating her Trojan shrine. Smoky Quartz Smoky quartz is an excellent stone for removing negativity and negative energy of any kind and transforming them to positive energy. It is also a very protective and grounding stone. It brings physical, protection, psychic protection and protection from negative energy. It enhances survival instincts, and can help one reach personal and business goals, as well as assisting in making wishes come true. Smoky quartz is beneficial for groups, and engenders cooperation. It also helps with creativity, prioritizing needs and wants, and wisdom. In addition, smoky quartz is a stone that brings abundance, prosperity, and good luck. Emotionally, smoky quartz is excellent for elevating moods, overcoming negative emotions, and relieving depression. Smoky quartz relieves stress, fear, jealousy, anger and other negative emotions by transforming them into positive energies. Smoky quartz is very comforting and calming, and can be considered a stone of serenity. It can, therefore, be very helpful in relieving grief. In the psychic and spiritual realms, smoky quartz grounds one during meditation, and can provide a grounded link between the physical and higher selves, helping to uncover subconscious wisdom. Using smoky quartz during meditation enables you to reach higher states of consciousness. Smoky quartz also stimulates kundalini. Because smoky quartz transforms and removes negative energy, it also protects and cleanses the aura and astral bodies. It can be used for psychic shielding. The “Athena” Talisman is for those that require protection, wisdom, being able to resolve conflicts and aiding in being strong fair and merciful. This Talisman pendant is a one of a kind and measures 8.5cm wide x 12.8cm long bale included Comes in a velvet bag with ritual and spell for you to align with

Be the first to review ““Athena” Talisman” Cancel reply