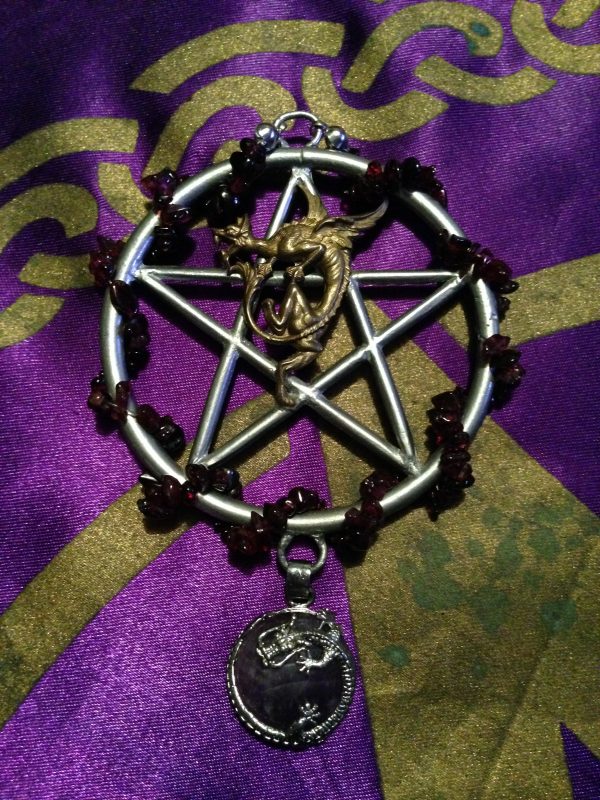 Dragon Protection Talisman hanger is made with pewter pentagram, with a brass dragon sitting in the centre and brass findings it has an half amethyst ball set with a silver dragon wrapped around hanging off the pentagram. The Pentacle, the symbol of Witchcraft, is a bold and fascinating statement about our place in the Universe. The pentagram represents an ancient concept that can be found in philosophical thought in both East and West. Although over 8,000 years old, the image of the pentagram is applicable in our modern world. The pentagram tells us that we have the ability to bring Spirit to Earth; this applies to every area of practical day-to-day living, as well as spiritual thought. The ability of bringing Spirit to Earth is what makes us whole. For modern-day Pagans, the Pentacle contains many wonderful layers of symbolism. The five points symbolize the four directions with the fifth point as the sanctity of Spirit, within and without. The circle around the star symbolizes unity and wholeness. It represents the quest for Divine Knowledge, a concept which is ancient in origin and universal in scope from the earliest written ritual texts in Babylonia, to the Celts, to the Native American traditions. Similar to other figures which are made of a single unbroken line, this symbol is used to mark off magical enclosures or ritual areas, especially when used for invocation of deities or spirit. The pentagram is one of the most powerful and popular symbols used by many Neo-Pagans, including those involved in Wicca and Ceremonial Magic. In working magic, Pagans may draw the shape of the pentagram in the air with the athame, or sacred blade, sometimes in the four directions as part of the ritual. A physical pentacle in the form of a flat disc is often the a main feature of the altar and is a widely used ritual tool. The symbol is used to decorate magickal tools or items such as a chalice, cauldron, or the handle of the athame itself. For some it represents feminine energy relating to the Goddess and may be used to bind elemental spirits of the earth as well as to hold consecrated objects such as herbs, amulets and crystals. The spoken or chanted text of a spell or invocation may be repeated five times to help insure its effectiveness. (3, 5, 7, 9 and 13 being some of the most commonly used repetitions in this context). The pentacle is worn both ornamentally and symbolically by many Pagans for protection and to signify that they are involved in the world of magick and divine wisdom. excerpt from www.witchvox.com The Witches Pentacle Author: Sharynne MacLeod NicMhacha Dragons often hold major spiritual significance in various religions and cultures around the world. In many East Asian cultures dragons were, and in some cultures still are, revered as representative of the primal forces of nature, religion and the universe. They are associated with wisdom-often said to be wiser than humans-and longevity. They are commonly said to possess some form of magic and are often associated with wells, rain, and rivers. To call upon the power and magic of a dragon is to call all the elements and beyond at once. The fire of magic, the water which is the blood of this world, the earth of the body and the container of magic, the air through which all life breathes. The order and chaos, bound and unbound, the energy which courses through all beings. Information from wiki answers AMETHYST enhances psychic abilities. Excellent for meditation. Aids in channelling, a sedative and protection stone. It also enhances feelings of contentment and a connection to one’s spirituality. Amethyst is a stone of peace and strength. The Dragon Protection Talisman Hanger is to aid in psychic protection. This Talisman hanger is a one of a kind and measures 7cm wide x 11.3cm long hanging loop included. Comes in a velvet bag with ritual and spell for you to align with