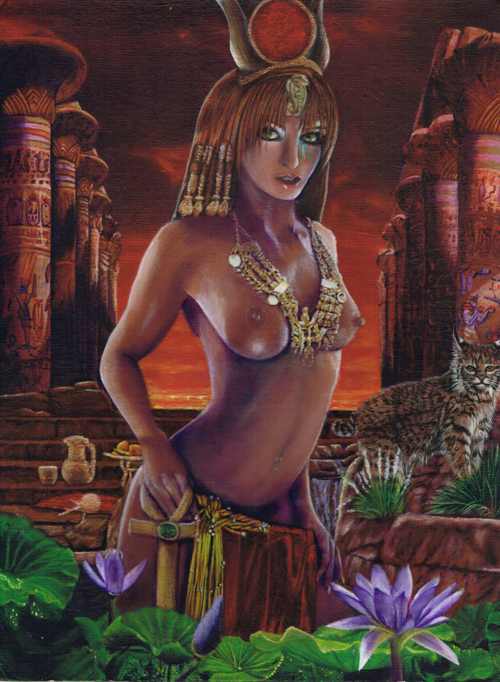 High quality prints on archival quality paper with a matt surface. Available in three sizes suitable for standard size frames. Please note due to the various sizes available some of the original image may be cropped to fit these size printsHathor (Egyptian: Ḥwt-Ḥr, “Mansion of Horus”),[1] is an Ancient Egyptian goddess who personified the principles of love, beauty, music, dance, sexuality, motherhood and joy.[2] She was one of the most important and popular deities throughout the history of Ancient Egypt. Hathor was worshiped by Royalty and common people alike in whose tombs she is depicted as “Mistress of the West” welcoming the dead into the next life.[3] In other roles she was a goddess of music, dance, foreign lands and fertility who helped women in childbirth,[3] as well as the patron goddess of miners.[4]The cult of Hathor pre-dates the historical period and the roots of devotion to her are, therefore, difficult to trace, though it may be a development of predynastic cults who venerated the fertility, and nature in general, represented by cows.[5]Hathor is commonly depicted as a cow goddess with head horns in which is set a sun disk with Uraeus. Twin feathers are also sometimes shown in later periods as well as a menat necklace.[5] Hathor may be the cow goddess who is depicted from an early date on the Narmer Palette and on a stone urn dating from the 1st dynasty that suggests a role as sky-goddess and a relationship to Horus who, as a sun god, is “housed” in her.[5]The Ancient Egyptians viewed reality as multi-layered in which deities who merge for various reasons, while retaining divergent attributes and myths, were not seen as contradictory but complementary.[6] In a complicated relationship Hathor is at times the mother, daughter and wife of Ra and, like Isis, is at times described as the mother of Horus, and associated with Bast.[5]This information was taken from:- http://www.goddessgift.com webiste

Be the first to review “Art Print – Hathor” Cancel reply