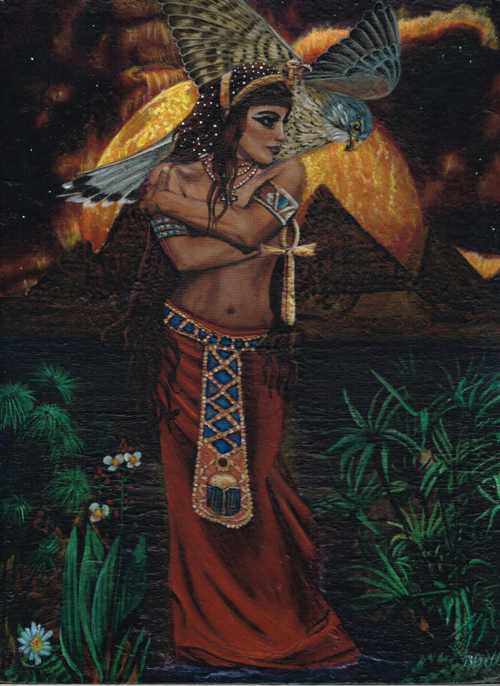 High quality prints on archival quality paper with a matt surface. Available in three sizes suitable for standard size frames.Please note due to the various sizes available some of the original image may be cropped to fit these size prints. Isis The Goddess of Magic Isis is the Egyptian goddess of Magic, is considered by many to be the absolute ultimate in goddesses, and she is referred to as “The Mother of All Goddesses”. Isis was an earth goddess who, of all the Egyptian goddesses, was the most caring ruler. The mighty Isis served her people as a midwife and physician, teacher and friend. Isis was a gal who had all the bases covered! The goddess Isis was such a well-rounded and complete woman that she was called “She of Ten Thousand Names”. Isis was a gentle ruler, a loving wife, and a nurturing mother, the Egyptian goddess Isis did it all! She was even known as the “Goddess of Magic”, and was a goddess of life and rebirth. Although Isis was called the Mother of Life, she was also known as a goddess of death. Her awesome powers, which included the resurrection of her husband, were recognized in the titles of “The Giver of Life” and “Goddess of Magic”. She is known both as a creator and a destroyer. Read the beautiful story of the love that refused to die . . . the inspiring legend of the eternal love that the goddess Isis had for her husband Osiris and how she breathed life into his broken body with her wings. Isis, the Egyptian goddess of rebirth, continues to be one of the most familiar images of empowered and complete femininity. This information was taken from:- http://www.goddessgift.com webiste.

Be the first to review “Art Print – Isis” Cancel reply