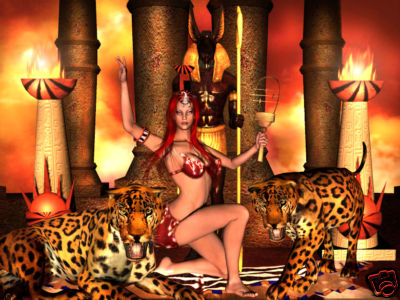 Goddess of the Household

Goddess of protection symbolizing the cycle of death and rebirth.

Her name means ‘Lady of the House’ it’s thought to be referring to Osiris’ Palace. In her funery role she was considered a fearsome but necessary companion to assisting the dead through the different levels of the afterlife.

She was also the Goddess of mourning, comforting the relatives of the deceased. These wailing mourners were described as the “hawks of Nephthys”. She shows you how to use the knowledge of universal laws of nature, the conscious mind and esoteric powers to manifest your desires. She helps you to use your gifts to increase your own power. She is associated with the unseen world and magic. You can call on her to help you transform situations, influence people and make your visions and dreams a reality. She reminds you not to use your gifts and abilities to gain power over others as this is not magic it is sorcery.

She was the darkness to Isis’s light, the bareness to contrast her sister’s fertility. Friend to the dead, their protector, she was a beneficial deity who offered both guidance and comfort. Although linked with death and decay, she was also a bringer of life into the world, and rebirth into the land of the dead. Leaving her husband Set she became a follower of Osiris and a supporter of her sister. In Egyptian art, the twin sisters were almost always shown together. Great of magic, Nephthys was seen as a good goddess who would give them rebirth in the land of the dead, just as she had helped Osiris to be reborn.

An attunement to the Goddess Nephthys

In the Book of the Dead, Isis was described as She who gives birth to heaven and earth, knows the orphan, knows the widow, seeks justice for the poor, and shelter for the weak. Some of Isis’s many other titles were:

Mother of the Gods,

The One Who is All,

The Brilliant One in the Sky,

Her Latin name was Stella Maris, or Star of the Sea,

underworld Mistress of the House of Life,

She Who Knows How To Make Right Use of the Heart,

Lady of the Words of Power,

Moon Shining Over the Sea.

The ancient Egyptian goddess Isis has many gifts to share with modern women. Isis embodies the strengths of the feminine, the capacity to feel deeply about relationships, the act of creation, and the source of sustenance and protection. Unlike the other Egyptian goddesses, the goddess Isis spent time among her people, teaching women how to grind corn and make bread, spin flax and weave cloth, and how to tame men enough to live with them.

Isis is the feminine archetype for creation – the goddess of fertility and motherhood. She has gone by many names and played many roles in history and mythology – as goddess and female creator!

An attunement to the Goddess Isis

PLUS – you can pass this wonderful energy onto others!!

WHAT YOU WILL RECEIVE:

For this Training course the manuals will be made available for download once your payment has been cleared into our accounts. The combined Goddess Nephthys & Isis certificate will be emailed however, you can select to have either the manual and or the certificate printed and mailed to you at an extra cost.

You will also receive guidance and support during and after the attunement.